On February 26th. 1993 there was a bombing in the World Trade Center in New York. My wife was in that building at that time and often has nightmares of being stuck in the stairwell for hours on end. The one thing that gave her hope as she stood backed up in the crowded stairwell was the Fearless First Responders that were all putting other’s lives above their own. To Honor our brave Firemen across this Great country who do the same, CigarAccessories.com is proud to present the  Red Line FD Cigar Humidor Supreme. This 15 X 10 X 6 ½ inch, 100 cigar Humidor would be a perfect addition to any Fire House. The Red Line FD Cigar Humidor Supreme has what appears to be a Diamond plate lid with lockset embossed with an American Flag with flames in the background. The Red Line FD Cigar Humidor Supreme has a deep redwood finish and the Fire Department Insignia on the front. A portion of the proceeds from the Red Line FDCigar Humidor Supreme will gladly be donated to the Stephen Siller Tunnel to Towers Foundation. If any of the Firemen that assisted my wife in 1993 are still around, I genuinely want to thank you from the bottom of my heart. 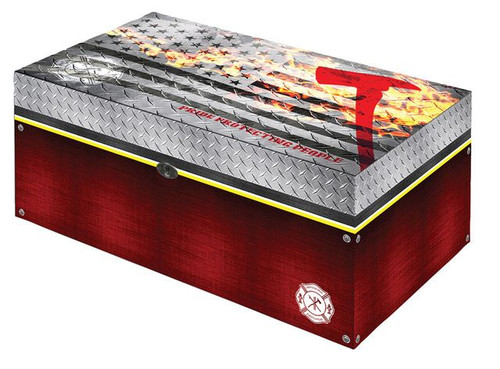